I began writing for BirminghamLive back in 2015 and was offered my first full-time role as an Advanced Content Writer (Sport) upon my graduation in 2016.

Initially I was tasked with covering all four of the West Midlands’ leading clubs but I’ve primarily had a Wolves brief since summer 2018.

My work covering Wolves led to me being nominated for Sports Journalist of the Year at the Midlands Media Awards in 2019.

Here are samples of my work for BirminghamLive:

Exclusive: Birmingham City boss Zola has made this change at the request of his players

You can find more of my work via my author page here.

And my Wolves portfolio can be found here.

I’ve enjoyed lots of success writing around young footballers on my patch. I’ve found that supporters are extremely keen to know all about the kids impressing in the academy and, in some cases, youngsters who’ve arrived from overseas.

Over the last few years I’ve owned BirminghamLive’s coverage of under-23 football in terms of news stories, backgrounders, interviews and opinion pieces.

I have also tried to profile starlets in all of the region’s academies.

As a result of building contacts within the academies and tracking down other useful sources, I have been able to write the following stories: 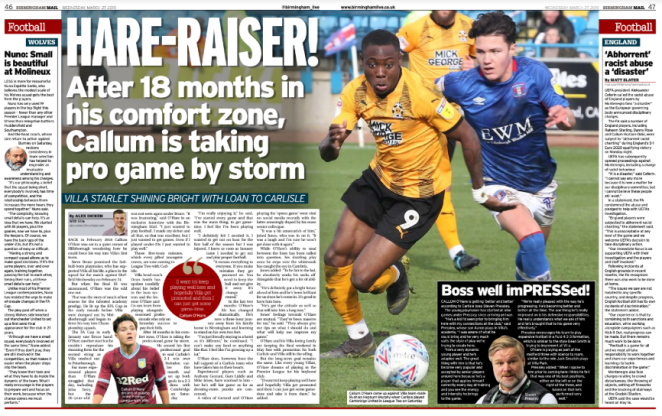 Mitch Clark: ‘I don’t want to be here, I just want to play with my mates’

Aston Villa’s French ‘match killer’ is ‘incomparable to another player’

Reacting quickly to breaking news situations is something I pride myself on.

Not only do live blogs have fantastic google ranking, they also allow you to recirculate other content.

Managerial departures are (very!) common on our patch and they represent a great opportunity to go live. I reacted to the news Alan Pardew had left West Brom rapidly and captured a big audience by running a blog.

Pulling in expert views, engaging supporters with polls and taking a look at who could replace Pardew made for a really great user experience and kept people interested throughout the day. 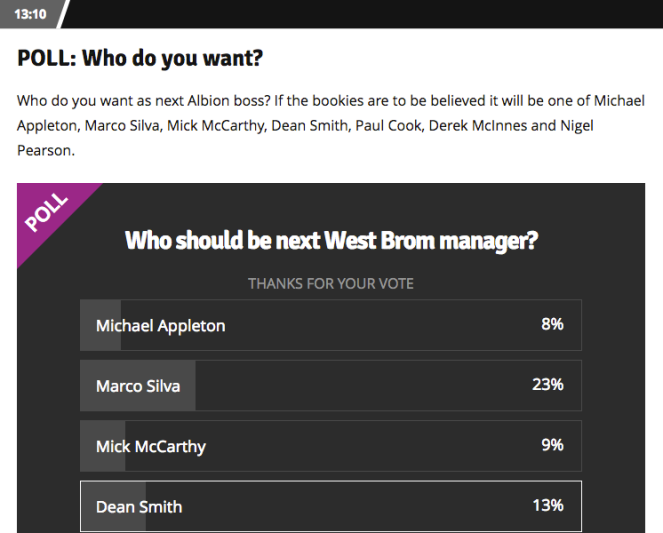 Another example of a well-received live blog was this one myself and colleague Brian Dick ran as Garry Monk was unveiled as Birmingham City manager.

I was charged with quickly transcribing Monk’s thoughts and publishing them in the live blog for fans to read.

Once the press conference is over, it doesn’t mean the live blog has to end. There are dozens of ways to keep readers engaged and ensure your audience doesn’t leave despite no further input from the manager himself.

In addition to the polls, fan comments and expert opinions listed above, analysis from writers works extremely well and adds another dimension to the blog.

It gives supporters a feel of the emotions displayed inside the room as the press conference took place. 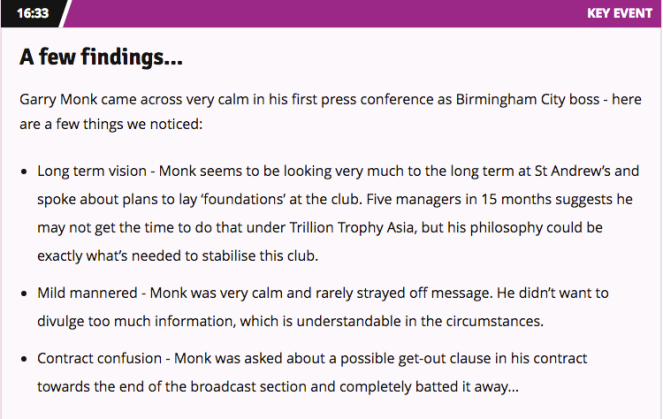